Sign up to get interesting news events, specials, birthday greetings and other exciting updates delivered to your inbox. Click below to enter your information.

Click below to make a reservation for our dining room.

We are proud to be the first Certified Green Restaurant®
in Wisconsin. 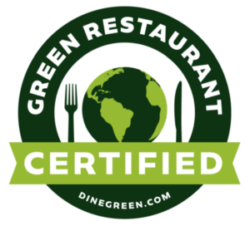 Café Manna is the first restaurant in Wisconsin to reach the 3 star Certification level.

We are open for indoor dining and carry out lunch and dinner Tuesday through Saturday, Sunday Brunch, and closed Monday.